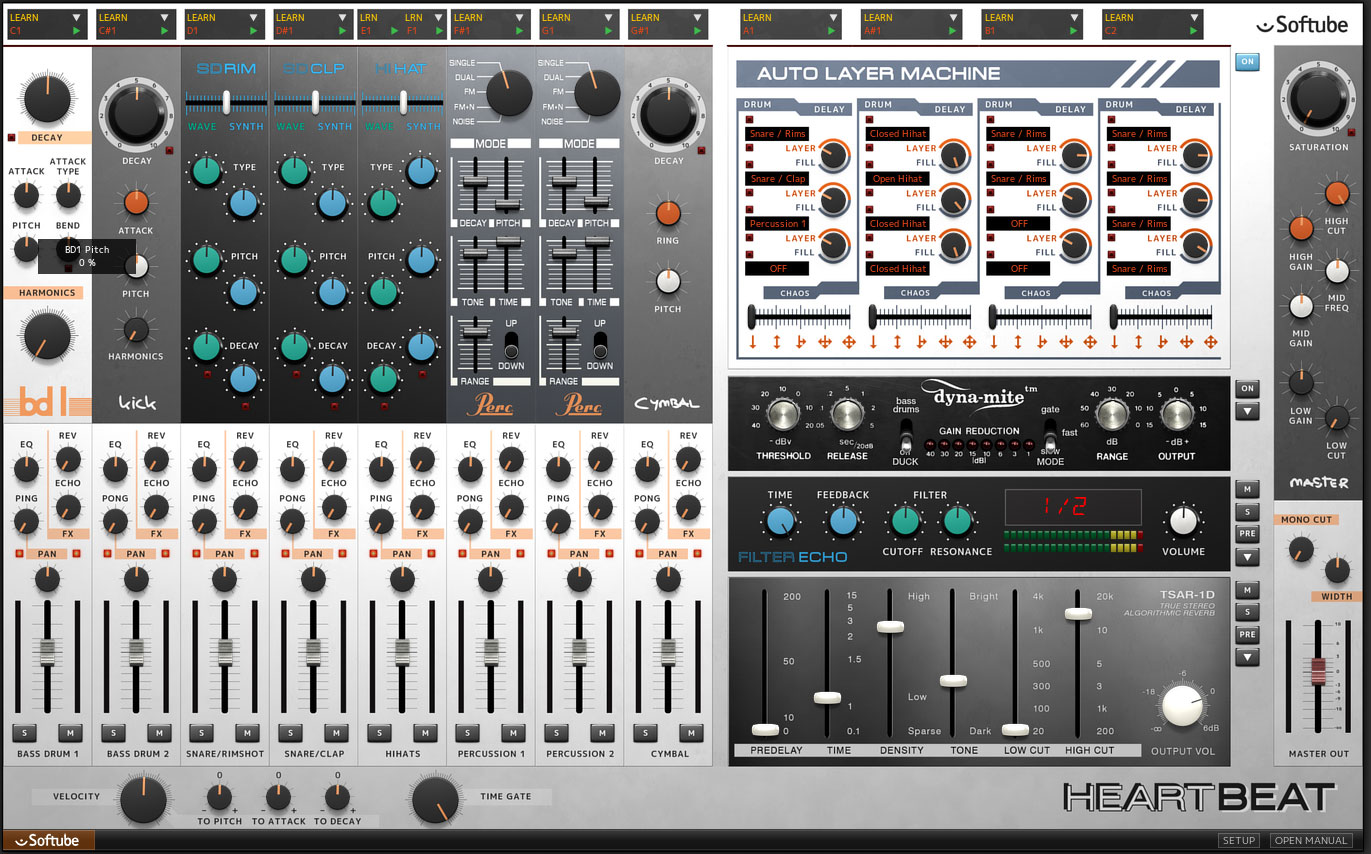 Your second question, if not your first, is probably: “Do we really need another drum machine?”

Unless you’re a die-hard drum machine buff, you’re probably thinking No – unless, of course, it has something new to bring to the drum machine party.

Heartbeat comes in VST, AU and AXX formats and in 32- and 64-bit versions so it will run in virtually any DAW.

It has one large interface which is neat as you can see all the controls at once – no tabbing.

At its heart – sorry! – Heartbeat features eight drums: two bass drums, two snares, two percussion sounds, a hi hat and a cymbal. The sounds are mainly modelled analog sounds but some drums such as the snares and hats also have a wave component.

The sounds unashamedly take inspiration from the classic Roland TR machines and the manual contains many references to ‘well-known Japanese’ drum machines from the 1980s.

However, Heartbeat is not simply an emulation or imitation as the controls give you far more flexibility over the sound than any analog machine.

Let’s look at a couple of examples. We’ll start with the first bass drum which has the following parameters:
Decay
The length of the sound. Low decay values produce short, sharp sounds.

Attack. Sets the level of the transient attack waveform.

Attack Type. Sets the character of the attack transient from electronic to more woody acoustic sounds. If the Attack parameter is set very low, the Attack Type won’t have much of an effect.

Pitch. Controls the pitch. This is evident even with short Attack settings.

The snares and hi hats have the following controls:
Wave/Synth. A slider to set the balance between a waveform and synth sound. The sounds produced by the three sections – Snare/Rim, Snare/Clap, and Hi Hats – are all different, tailored to the type of drum sound each one produces.

Type. There are two knobs here, one each for Wave and Synth, and they control the character of the sound. The Wave can range from a snare – okay! – sound to a rim shot, while the Synth has a more electronic and pitch-based sound.

Decay. Sets the duration of the Wave/Synth parts ranging from clicks to fuller sounds.

The hi hats are actually triggered from two MIDI keys, one for open and one for closed. They choke each other so you get a realist hi hat effect.

As well as their own individual controls, each drum sound has its own mixer channel containing EQ, Reverb, Echo and Ping controls. Ping bounces alternate drum hits to the left and right stereo positions.
The manual is keen to point out that the EQ should be regarded as part of the drum sound and each EQ is tuned to the sweet spots of each instrument.

A nice touch is that the manual suggests settings for different kinds of drum sounds such as house, acoustic, electronic and techno kick drums, house clap, digital hats, and noise cymbal.

They’re good suggestions to get you creating your own sounds, and, in fact, programming is quite addictive.

Although Heartbeat’s, er, heart might be in old Japanese drum machines, the controls allow you to create sounds the old machines could never produce. You can do analog, modern electronic and even create synths sounds you’d never expect from a drum machine – while still retaining the essence of analog if you wish. The Auto Layer Machine is in the top right of the interface and here you can combine up to four drums to be triggered by a single MIDI note.

There are four ALMs, all identical. They each have a drum column and a delay column. In the drum column you select which four drums you want to layer.

The delay column lets you delay the progress of the ‘signal’, as it passes down the drum layers to create flams and little fills. Some of the presets contain super examples of this.

On the one hand this is a useful shortcut for creating little fills and lead-ins, but you can also create more layers and play them consecutively for more complex fills. Chaos factory
For added variation, each layer has a Chaos slider which adds increasing amounts of randomness to the patterns.

For example, a small degree of chaos will reverse the direction of the triggers making some move upwards instead of downwards. More chaos makes the triggers spill over into adjacent ALM channels while full chaos sends triggers everywhere.

The patterns don’t necessarily repeat so you can create truly random sequences which you’ll only fully appreciate when you sober up. Or not.

Perhaps more practically, the introduction of just a little chaos here and there can add a touch of humanness and variation to a pattern. Well worth experimenting with.

Special FXxxxxxx
As well as the drums, Heartbeat features three high-quality Softube FX, tweaked to fit the requirements of a drum machine. They are the Valley People Dyna-Mite compressor/limiter/gate, the Filter Echo, and the TSAR 1D Reverb.

They are shared by all the drums and the sends for the reverb and echo are controlled by the individual knobs in each mixer channel. The Dyna-Mite is applied to all instruments on the stereo out and features a bass Drum Duck switch. Masterful
The Master bus output section on the right of the interface includes a host of additional controls for customising the sound.

At the top is a Saturation control which mimics the effect of a vacuum tube which can thicken and deepen the sound.

There are also High, Mid and Low frequency cut and boost controls for final shaping and, perhaps, to tweak the frequency spectrum if the drums are proving problematic in a particular area.

A Width control gradually makes the output more mono, and a very interesting Mono Cut control sets a cutoff frequency below which every frequency is summed to mono. This is a great way to ensure that there are no phase issues in the low end of your drum’s frequency spectrum.

High Velocity
There’s another cool feature at the bottom of the interface which determines how velocity affects not only the volume but also pitch, attack and decay.

Also in this section is the Time Gate which reduces the decay of all instruments globally creating a chopped-off effect.

Finally, if you want ultimate control over ach drum sound, you can get it as Heartbeat creates nine stereo outs which you should see in your DAW’s mixer.

In Kontrol
Heartbeat supports Native Instruments’ NKS protocol. It interfaces perfectly with Komplete Kontrol, mapping drums to the C1 octave and various parameters to the keyboard knobs. The Light Guide uses different colours to show the four pairs of drums and the Auto Layer keys.

It appears in Maschine, too, but as an Instrument rather than a Group. This means that selecting a preset doesn’t map each drum to a pad or put each sound in a Maschine slot. Rather only the preset name appears in whichever slot has been selected.

From the Maschine software you can play the entire kit from an attached keyboard as you’d expect but with the Maschine hardware you need to lower the default octave to C1 and then you can play all the sounds from the pads although they all appear in the current slot, not spread over several parts.

Whether Softube can or will add a ‘Maschine mode’ in the future, who knows, but the combination of Machine pads and controls with Heartbeat’s sounds would be an absolute killer combination.

Of course, if you’re not a Maschine user, that won’t bother you one bit but you will be interested to hear that Heartbeat has a MIDI Learn function so you can map each drum sound to the pad or key of your choice.

Heartbeat certainly comes to the drum machine party with a big bag of goodies – if that’s not stretching the analogy too far.

You can create a vast range of superb analog-ish sounds and quickly push them towards virtually any modern music genre you want. Punchy, woody, distorted, pitched, digital – it can do them all. Don’t think analog, think analog +++.

Heartbeat is one guest you definitely won’t want to leave!