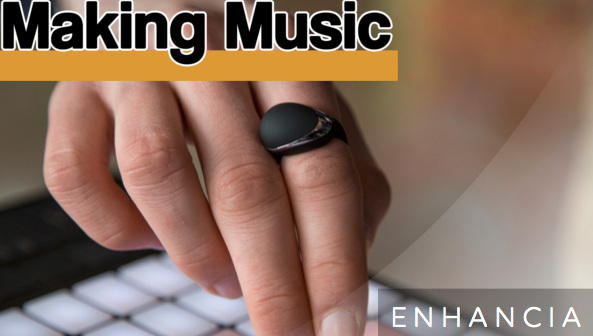 One ring to rule them all…?

Well, not quite but French tech company, Enhancia, have announced a Kickstarter pre-sale to finish development and manufacturing of their new product, the Neova MIDI ring.

While MIDI controllers in various shapes, sizes and types are available already, most require the user to remove a hand from the instrument they are playing to use the controller to effect parameters, unless you count the innovative foot controller made by Poly Expressive, seen here…

The Neova however, slips over the performer’s finger and can track five different gestures or hand movements: Vibrato, Bend, Tilt, Wave and Roll, some of which are possible while still having your hands on your MIDI keyboard.

While it would take a few paragraphs of explanation, this video perhaps shows it better in action.

Although the video shows the wired prototype, the retail version is wireless and comes with a USB hub and software, allowing it to communicate with any DAW and is compatible with software synths and MIDI controllers.

9 on-board motion sensors track gestures and translate them into MIDI instruction for the music making software to react to. Enhancia have created and patented their own wireless protocol that they claim to be 8 times more reactive than Bluetooth, having a latency of 2ms.

Enhancia’s co-founder and CEO, Damien Le Boulaire, had this to say about the purpose of the product: “As a musician, I believe that emotion is the purpose of each melody. In musical performance, subtlety is a key. Every intention, every micro-gesture should be captured to reflect the intensity of your feeling as truthfully as possible. We imagined Neova with the simple idea of creating the shortest path between your musical intention and music creation”

You can view the Kickstarter campaign here and if you needed any more persuasion, here’s Stevie Wonder trying out the Neova at this year’s CES exhibition.